MY OLDIES BUT GOODIES

Never Were Men So Brave: The Irish Brigade During the Civil War

Society of School Librarians International, 1998 Book Award
Purchase a copy of Never Were Men So Brave at amazon.com

From School Library Journal
Grade 5 Up?The story of the Irish Brigade, one of the most colorful and feared Northern units in the American Civil War. Supported by a generous number of period photographs and reproductions and skillfully selected excerpts from primary sources, the book documents the Brigade's origins among the "Young Ireland" movement of the 1840s, follows it through bloody military glory (at Antietam alone, the Irish Brigade suffered more than 500 casualties), and touches on the postwar fates of the survivors. Details of the author's historical research in Ireland and the U.S. abound throughout, but never slow the narrative, which is skillfully organized, fast paced, and compelling. Especially fascinating are Beller's vivid portraits of some of the Brigade's amazing characters. Among these were Commander Thomas Francis Meagher, who lived through deadly danger both as an Irish rebel and a Union officer to become acting governor of the Montana Territory before his death in 1867. Equally memorable, Father William Corby became possibly the most famous chaplain in the war after his inspiring blessing on July 2, 1863, caused Catholics and non-Catholics alike to fall to their knees on the Gettysburg battleground. This book is a fine example of historical exposition for young people, and is a worthy follow-up to the author's To Hold This Ground (McElderry, 1995).?Starr E. Smith, Marymount University Library, Arlington, VA
Copyright 1998 Reed Business Information, Inc. 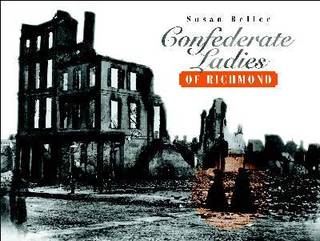 "...Illustrated with many period photographs and engravings and well documented with sourcenotes, this book offers an unusual focus on the war, looking less at those who planned the strategies, led the armies, and fought the battles, and more at those who sewed the uniforms, tended the wounded, and attended the funerals.."

School Library Journal:
"Without making political judgments and through careful research, Beller gradually relates the horrors of the time. She focuses on the female population of Richmond, and through excerpts from their journals, readers get a vivid picture of their gradual transformation from society ladies ... to women fighting for their beliefs ... The author gives a human face to this tragic period of history and demonstrates that the suffering reached everyone involved ... an excellent nonfiction read" Reviewer: Renee Steinberg, January, 2000.

Cadets at War: The True Story of Teenage Heroism at the Battle of New Market

Purchase a copy of Cadets at War

School Library Journal
"Beller has carefully researched a wide variety of primary-source material ... in order to give a fascinating, readable account of the battle and the boys who took part in it. By including the actual words of the cadets, she helps readers understand the feelings, motivations, and experiences of the battle's youngest participants." Reviewer: David A. Lindsey, June 1991.

Mosby and his Rangers: Adventures of the Gray Ghost

Purchase a copy of Mosby and His Rangers

Ride with the Gray Ghost of the Confederacy in Mosby and His Rangers as a small group of guerilla fighters keep thousands of Union troops tied up defending Washington. Presenting the excitement of the raids in the words of the Rangers, the book then carefully puts their controversial tactics within the larger perspective of the resulting Union punishment of civilians.