To Hold this Ground: A Desperate Battle at Gettysburg

The fight for Little Round Top on the second day at Gettysburg was one I wanted to tell, not simply because of its military importance, but because it involved two men fighting each other whose total lives were eerily parallel. Joshua Lawrence Chamberlain, heading the 20th Maine in defending Little Round Top from attack, was a college professor turned soldier, a most unlikely hero. William Calvin Oates, leading the charge of the 15th Alabama on that same hill, could not have come from a more different background that his adversary. But both of them fought with their brothers at their side that day (Oates' brother would die in the fighting), both survived terrible wounds later in the war that would trouble them for the rest of their lives, and both went home to achieve recognition in politics, serving as governor of their home states.

The battle would be crucial in the ultimate defeat of the Confederacy and the fight on the hill is as exciting as any other story of the war. But it is in the story of these two colonels that we come to understand the values and determination that men on both sides of the war brought to this fight. They speak to us in their own words and through these take us back to the moment in history when the fate of their respective causes was in their hands.

New York Times Review of Books, November 12, 1995
"Mrs. Beller has done a very deft job of interweaving convincing portraits of Chamberlain and Oates with a swiftly paced narrative of their fight. In carefully documenting this one extraordinary moment in the war, she has created a useful, moving work." Reviewer: Richard E. Nicholls

From Gisela Jernigan - Children's Literature
"Using examples and quotes from primary sources, the author does a very good job of describing the battle and its aftermath in an exciting but realistic way that reflects the bravery of the two leaders and their men, but does not overly glorify the bloodshed."

Children's Book Review Service
"Using original sources, including diaries and letters, she provides insights into their lives and illuminates the story of the battle itself. The horrible conditions, the tactical mistakes, and how it fits into the whole are presented clearly and sympathetically." 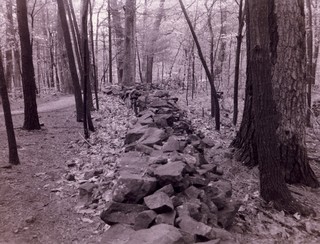 Little Round Top today with a reconstruction of the wall the 20th Maine would have put up to hide behind.